Part One: Reporting and Investigation 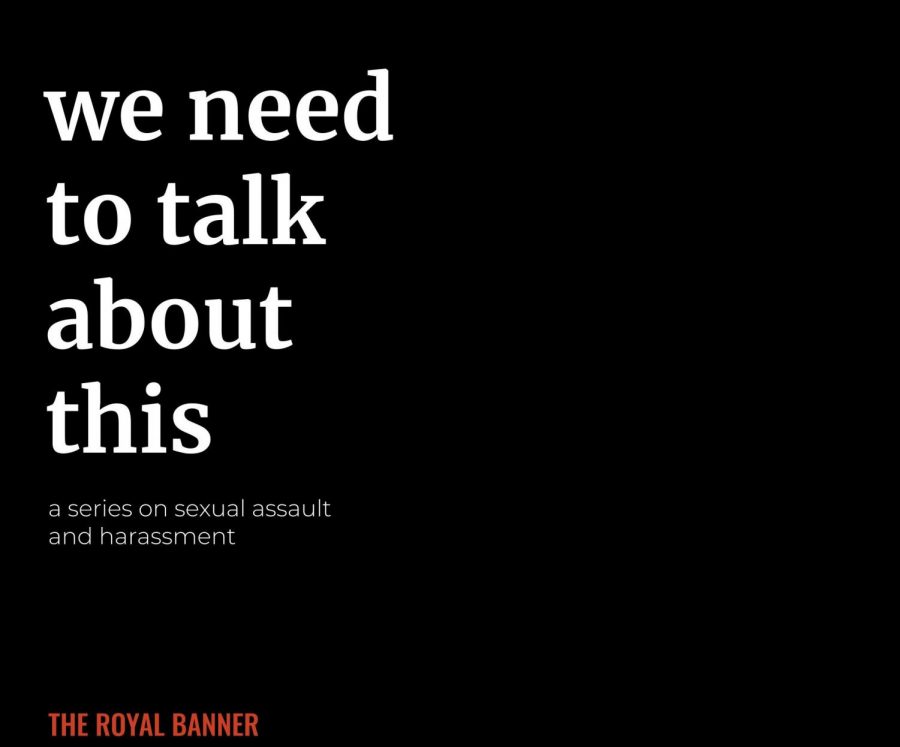 This is the first part in the Banner's series on sexual abuse.

When we don’t talk about it, misinformation and uneasy feelings spread and make the whole conversation, or lack thereof, alarming and unsafe. Therefore, it’s time that The Royal Banner takes on the topic of consent and sexual assault to inform and, hopefully, start the conversation within our school.

There is certain policy that the school must follow when presented with a case of reported sexual assault. Principal Don Stensrud explained the details of what actions he must take in these situations.

If the perpetrator contacts the victim regarding the assault at school after the assault occurred, the administration can take action, as it is a Title Nine violation.

“A lot of times we’ll tell victims, ‘get a restraining order if you feel uncomfortable.’ Because anyone can get a 21 day temporary restraining order for virtually anything. So that usually lays the groundwork for us to start dealing with the perpetrator,” said Stensrud. “That’s where it seems like the school is not doing anything, and in essence, we aren’t, but that’s not because we don’t want to, it’s because we can’t.”

However, if the assault occurred at school, both the administration and the police do an investigation. From the administration’s side, they will look at the security cameras and talk to the witnesses with the intent of finding the truth of what happened.

If the assault happened at school or during a school activity, Stensrud does not need the same burden of proof that the police do to take action against the perpetrator. He can remove them from school to protect the victim.

Stensrud thinks that a societal problem surrounding this issue is that the victims don’t feel safe enough to share their story.

“We’ve got to get somewhere at our society where there is the ability and the safety for young ladies and young men to share their stories of being sexually assaulted, protect them, get legal actions taken care of,” said Stensrud. “That’s the only way we’ll prevent it because right now, if you’re sexually assaulted and you don’t tell anybody, that young man or whoever sexually assaulted you feels they have license to do it again.”

He explained this further with an example from seven to eight years ago. According to Stensrud, a senior girl was raped at a party and made a phone call to the police. The senior boy who assaulted her was sentenced. They found that he had assaulted multiple other victims by getting them intoxicated. Because they didn’t report it, under the impression that it was their fault because they were intoxicated, it allowed the perpetrator to believe that he should do it again. Obviously, it is not the silent victims’ fault for the future wrongdoing and lack of moral integrity of the perpetrator, but by reporting their story, preventing future incidents is a possibility.

The issue of reporting is a complicated one, however. Once victims go public with their story, they can get blamed and unfairly treated. (We will be talking about this victim blaming culture later in the series.)

The school administration works with Blue Sky Bridge, which attempts to create a safe environment for abuse victims. The administration provides the victim and their family support through Blue Sky Bridge’s counselors and Fairview’s mental health worker.
“We do everything we can.”
“Do sexual assaults happen between high school kids? Yeah, they do. Is it only Fairview? No. It’s every high school. And will we remove kids when we can? Absolutely,” said Stensrud. “We do everything we can to protect the young lady or the young man who’s been sexually assaulted.”