Part Two: He Took Everything From Me 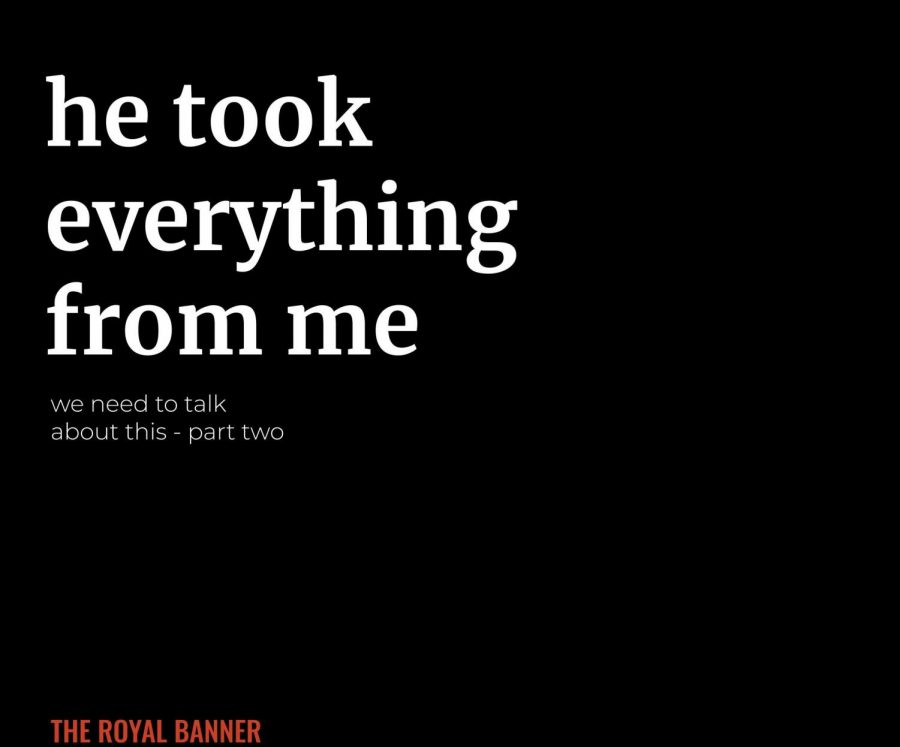 This is the second part in the Banner's series on sexual abuse.

This article has content that may be disturbing to readers.

In order to protect the identity of this student, her story is being published anonymously. The Royal Banner has confirmed some details of her interview with friends of this source.

“He put his hand over my mouth and he told me to be quiet and he raped me. We broke up the next day; he broke up with me.”
In the recording studio that The Royal Banner uses for interviews, an anonymous source sat down to tell me about how she was sexually abused her freshman year.

“I want to tell my story because I hope that I can inspire someone in my situation to hopefully speak out because I couldn’t,” said the anonymous student.

This student says she was raped and sexually assaulted by her former boyfriend.

“I had known this person since middle school, and we had become really good friends. We began as really good friends and then we started dating,” she said. “He was very aggressive and jealous […] he thought that in some ways I was being a slut because I was friends with a bunch of guys and he said the reason I was friends with guys was because I wanted to hook up with them.”

It wasn’t long, said the student, before things took a turn for the worse.

“He knew that I really liked him, and it turned into a form of manipulation where he would threaten to break up with me if I wasn’t doing what he was liking. It snowballed and got worse, I lost all of my friends. He said that the only way to further our relationship was if we had sex,” she said. “I told him ‘No’ multiple times. He would tell me, ‘If you don’t do this, I’m going to have to break up with you. This is the only way we can further our relationship and if you actually love me, you would do something for me.’”

As the situation escalated, the student said her ex-boyfriend tried to force himself on her multiple times, despite her protests.
“The first time I was raped was in the forest outside of Fairview.”

“The first time I was raped was in the forest outside of Fairview. We were on a walk and he pulled me into the trees in front of Viele and I told him to stop and that I really didn’t want to, and then he kept going and he didn’t stop,” said the student. “From that point on, it kept happening at different points in our relationship […] it felt easier to just let him do what he wanted because if I didn’t it would turn into a bigger thing where he would become really aggressive and cause a huge scene. It was taking a toll on my mental health, so I thought that, at that point, it was just easier to give in.”

She said that the assaults “had happened for months in our relationship,” including a second time: “He brought me downstairs into his room and he shut the door. He put his hand over my mouth and he told me to be quiet and he raped me. We broke up the next day; he broke up with me. I said, ‘Why did you do that if you knew we were going to break up the next day?’ and he said he wasn’t sure, but he knew that he wanted to break up with me for a long time and that the only reason we stayed together was because he was using me. That’s how our relationship ended.”

The anonymous student was severely hurt by this trauma and left without a serious support system.
“This was the first time I ever considered suicide.”
“That was the first time I ever considered suicide. I was in a really horrible mental state. Like I said, [my best friend] was the only person I really had, thank god I had her, but he took everything from me. He took my friends, my mental health was horrible. I’ve never been that depressed in my life. My family didn’t know about it, either,” she said. “I didn’t feel like I could tell [my mom] because it could get reported and that wasn’t what I wanted at the time. It was difficult having only one person to talk to about it.”

The student also said that she was impacted by her friends, “A lot of my friends at the time were his friends, so I knew that if something had started, he would tell them all something and I would have taken a lot of heat from his friends.”

The student said that even today she is still seriously hurt from the abuse.

As our conversation came to a close, she had one piece of advice for those who have been victims of sexual abuse.

“Don’t listen to what people are always telling you. It’s never your fault. If you’re assaulted, it’s never the fault of the victim and we tend to make it seem like the victim always did something wrong. It’s always okay to ask for help.”