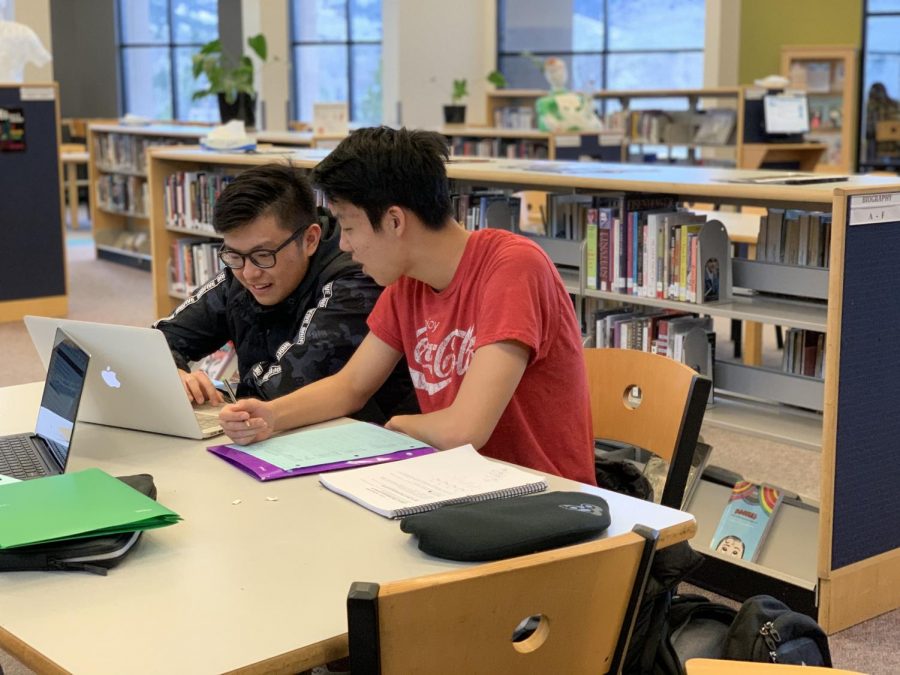 Kevin Xu and Jaden Kwon studying in the library. Students are hard pressed to achieve highly in academics across the school.

The education system is becoming increasingly competitive over the years, rendering clubs and volunteer hours a mandate in order for ambitious students to be considered for top-tier schools. In an environment full of these ambitious students, our school is not scarce in clubs and volunteering opportunities. Tutoring and bake sales are not uncommon to witness within the building.

“Students who are worried about how to present themselves on college applications […] are just worried that if they don’t have a whole long list of things they’ve accomplished that they’re not going to get into a place that feels meaningful to them,” said Carol Diebel, the school’s college and career center volunteer coordinator.

Nationwide organizations focused on service, such as National Honor Society, are clubs dedicated to recognizing and encouraging outstanding high school students. Many students join these clubs solely for the purpose of recognition and the ability to add something to their college application. Furthermore, these clubs require a minimum number of volunteer hours in order to remain a member.

The Royal Banner granted anonymity for interviewees in order for them to input their real opinions, and state what they really think.

“NHS hours are meaningless values that are supposed to quantify the meaning of the volunteer work,” said one of the anonymous students. “They do it to put it on college applications, but in the process they help the community.”

Although the majority of the members volunteer for self betterment and community betterment, there also exist those individuals who strive only to satisfy the requirements to reap the possible college admission benefits.

“I personally believe that most high schoolers who volunteer, or aim to get high leadership positions in various clubs around the school, do it in order to seem involved and make their college applications seem more impressive,” said a student.

Other students personally admitted to being at fault when it comes to having ulterior motives for volunteering and joining extracurriculars.

“A major benefit would be that it improves my chances of getting into the college I want to,” said a student.

Not all people are so cynical, although they still admit that part of their motivation derives from self benefit.

“Volunteering provides many opportunities, such as connecting with friends over shared experiences and to gain high school credit while at it,” said a student.

Besides the clubs that are meant primarily for fun, such as Humans vs. Zombies or Smash Bros Club, most clubs at the school are academic clubs meant for volunteering or expanding on academic subjects. The large amount of academic clubs reflects upon the interests and ambitions of the student body.

“In the category of people who are applying to some more competitive colleges, I think they feel pressured to have a lot on their resume,” said Diebel.

Diebel explains the true benefit of being able to add these descriptions to your resume: a resume filled with endless volunteer hours and extracurriculars aplenty.

“The trouble with filling out an application is that students generally do one part at a time, and they don’t always think about the whole picture, that the college sees,” said Diebel. “They are trying to put together a whole picture of the student.”

For that reason, colleges seek a resume that is consistent with the student’s interests and passions. More than volunteering at various places for short amounts of time, colleges prefer to see commitment by volunteering at a single place for the long term.

“Don’t use your high school years wearing yourself out trying to be part of everything. Instead let high school be a time of self discovery where you try some clubs and activities and see what you like and pursue what you like,” said Diebel. “The advice is don’t join things just to pad the resume or just be busy, but find things that really pique your interest with people you want to be with.”

Diebel thinks that students who join clubs and volunteer for the purpose of adding more to their resume are unsure as to how to represent themselves and/or are students who are under a lot of pressure to get into better schools. Competitive as the admission to college has become, deceiving colleges by adding activities can backfire easily. Students may choose to appease colleges as elaborately as possible, but if the admissions officer finds the application not to match the identity of the student, they will be less likely to accept your application.

“[College applications] can appear artificial very quickly, especially if it doesn’t validate the direction that the student is presenting in the application,” said Diebel. “It usually comes out in an essay or additional information or in a supplement where somebody is trying too hard to present who they are so it’s very rarely just in the list of clubs and activities. It’s usually discernible in different places and things just don’t add up.”

Diebel recommends that students try to use their resume to represent who they are the best that they can.