Who: The Who’s Latest Album Review 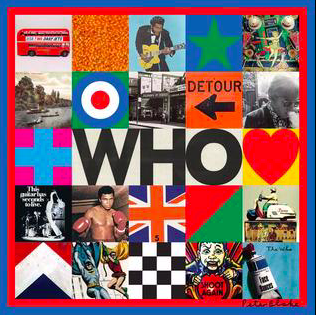 The Who are a British rock band formed in 1964. They have 12 studio albums, 58 singles, and have sold over 100 million records worldwide. The band consists of Roger Daltrey, the singer, and Pete Townshend, the guitarist/songwriter. Today I will be reviewing their newest album Who and the 11 tracks that come with it.

All This Music Must Fade is the opening track to the album. The song is a great entrance to the album, being strong and powerful.

Ball and Chain is the best track on the album. The song is masterfully put together, cementing itself as a classic from the band. Its instrumentation is gorgeous, slowly building itself up overtime adding more sounds until the song bursts open with singing.

I Don’t Wanna Get Wise is a song with an upbeat sound. Roger Daltrey has a loud voice and belts out the lyrics with all his heart, showing how much he cares about his music.

Detour is a catchy and fast paced tune. This is a great track that shows the range of The Who. Overall, an amazing track.

Beads On One String is a good track. It doesn’t really add anything new to the table, although it still holds up to the standards The Who has set for themselves. In the end, it’s still a track worth listening to.

Hero Ground Zero is an awesome song. Using orchestral elements along with guitar and drums, it manages to create a complex and intriguing sound only found in an album like Quadrophenia, a “Rock Opera” from the band. This track fits the mold of other songs found on the album, but at the same time adds new instruments which give the tune a fresh sound.

Street Song is a tune that is fairly calm. Although it may not seem to bring much at first, Roger Daltrey’s voice adds a lot to the song, being heartfelt and powerful. This makes the track one of the best on the album.

I’ll Be Back is a beautiful yet somber track. The singer, Pete Townshend, has a beautiful voice. His voice carries a melancholy tone throughout the song, as Pete brings up the fact that he needs to prepare for the inevitable end. This definitely makes the track another classic.

Break The News is a track that doesn’t sound anything like The Who. It sounds like something that may come from a mainstream Pop artist. That does not mean that it’s a bad track, however. The song is nice and chill, which is great.

Rockin’ In Rage is a song that starts off okay and gets better and better as the track progresses. The song It is amazing how great the song sounds, and it is a perfect representation of Rock and Roll.

She Rocked My World sounds like something off of a Tom Waits album. This song is another genre switcher, as it sounds like none of the other pieces on the album. Furthermore, it could be said that this song sounds like nothing The Who has ever released before. This being said, the track is another classic. The instrumentation, along with the singing from Roger Daltrey, is beautiful, and makes for a great end to the album.

I was pleasantly surprised when I heard this album. The tracks in this album are all great, and there are no bombs. The amount of amazing songs in the album is astounding. It is truly amazing that Pete Townshend and Roger Daltrey are still putting out great music, and it is just wonderful. My final rating for this album is a 9/10.