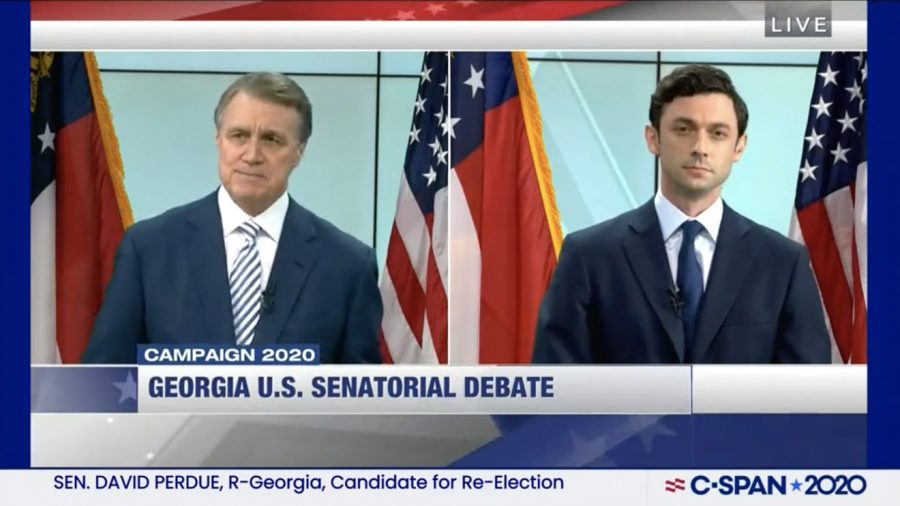 Screenshot of a senatorial debate between Ossoff and Perdue.

On January 5th, two runoff senate races in Georgia will determine whether Democrats or Republicans control the senate for the next two years. In the general election, none of the candidates in either race managed to cinch more than 50% of the vote, which is required to take office.

Should the Democratic candidates win both seats, there will be 50 Democratic and 50 Republican senators, with Vice-President Harris acting as the tie-breaking vote. Should one or both of the Republicans win, the senate will remain in Republican control for the next two years. Assuming senators mostly vote along party lines, this will make it difficult for the Biden presidency to pass legislation for at least the first two years of the administration.

In the former of those races, libertarian candidate Shane Hazel took 2.3% of the vote, leaving Sen. Perdue with 49.7% and Mr. Ossoff with 47.9% in the November 3rd election. Georgia’s 16 electoral votes went to President-elect Biden by a stunningly narrow 0.2% margin, only about 11,800 votes. This is a change from 2016, when Georgia chose President Trump over former Democratic nominee Clinton by more than 5%. But who are these candidates?

Incumbent Senator Perdue, according to his own website, is “[…] a champion for term limits for politicians, reining in out-of-control spending, growing the economy, and tackling our nation’s debt crisis.” The conservative Republican has served since 2015. A former CEO of Reebok Athletics and General Dollar Stores, he came into politics citing himself as “the outsider” who would “change the childish behavior of Washington politicians.”

Though endorsed by President Trump, he has acknowledged President-elect Biden’s victory, which some Republicans (including the President himself) have not, on the grounds of baseless claims of widespread fraud.

According to Ballotpedia, Sen. Perdue’s top issues include tackling the national debt, repealing the Affordable Care Act, and an “America-first” agenda that supports border security over immigration reform. An anti-abortion stance is also key to his platform, which is supported by his voting record– in 2020, he supported the bill to ban abortion after 20 weeks. In his 2014 race, when he first took office, he also cited “traditional marriage” (opposition to gay marriage) among his top issues.

In this high-profile runoff race, some attention has been called to Perdue’s participation in the stock market– over his years in office, his trading has accounted for ⅓ of all stock trading among all senators, according to public data aggregate Senate Stock Watcher and analyzed by the New York Times. Serving on a national cybersecurity committee, he potentially had insider trading information giving him reason to invest in FireEye, a cybersecurity commission, as he did. FireEye recently received a 30 million dollar subcontract to work with the Army Cyber Command, all under Senator Perdue.

Jon Ossoff, on the other hand, is a complete newcomer to the political battlefield. A former investigative journalist and CEO of a company that produces documentaries investigating organized crime and political corruption, he has no voting record to speak of.

According to interviews and his own website, Ossoff supports a public option for health care, immigration reform over border security, legalizing cannabis, and ending imprisonment for nonviolent drug offenses. Similarly to Perdue, he supports the second amendment but calls for a ban on semi-automatic rifles. In contrast to Perdue, he supports equal rights for LGBTQ+ Americans.

Ossoff claims to take no money from gun lobbyists, which is backed up by his campaign finance records. With a total disclosure percentage of 99.86 (higher than Sen. Perdue’s 86.04%), his largest individual backer is Alphabet Inc., the conglomerate under which Google and its subsidiaries are held.

As of today, polls narrowly favor Perdue by about 0.1%, well within the margin of error. Early in-person voting began on the 15th of December, and Georgians can vote by mail, so it will likely take several days after the election on January 5th to determine a victor, and determine control of the US senate for the next two years.