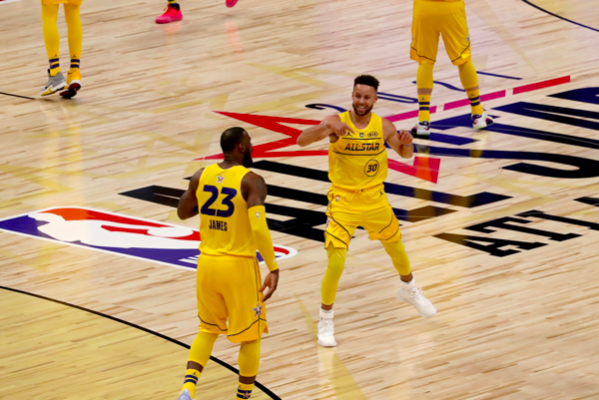 The NBA All-Star game is the only game in the season where the league’s superstars play against each other in a high-scoring, action-packed game. Every All-star game from previous years contains many iconic highlights and moments, and this year was no exception. Here is a recap of the best moments and scores of the 2021 All-Star game.

Prior to the game, it was announced by various teams that Kevin Durant, team captain of Team Durant, would not play in the game due to a hamstring injury. This opened up a spot for Jayson Tatum to be a starter. Both players chosen from the Philadelphia 76ers, Joel Embiid and Ben Simmons, had tested positive for COVID-19 and would not be participating. Also, Devin Booker from the Phoenix Suns would not play during the game due to a left knee sprain. Booker himself was a substitute for Anthony Davis from the Lakers, who was chosen as an All-Star starter. This opened up a space for a surprise starter, Mike Conley of the Utah Jazz. Conley was originally only selected for the three-point contest, but made his first all-star appearance and ended the game with a single three made. Usually, the Dunk Contest would take place at a different time before or after the game, but due to COVID-19 protocols mandated by the league, players would be confined to a nearby hotel when they are not at the arena, and the Dunk Contest would be squeezed in during halftime. The other All-Star weekend events (skills challenge and three-point contest) would also take place before the game, on the same day. Read a full recap of these events here.

The scoring in All-Star games is very different from regular season games. The team with the most points scored in quarters 1, 2 and 3, would be declared the winning team for that quarter. A tip-off would start every quarter, instead of just the first. For those three quarters, the winning team would donate $150,000 to their charity of choice. But, for the fourth quarter, in honour of Kobe Bryant who wore number 24, 24 points would be added to the sum of the points scored by the winning team of the third quarter. That amount would become the target score, and the first team to reach that with their combined 1st, 2nd, and 3rd quarter scores plus their 4th quarter score would win the game and donate $300,000 to their charity. Team LeBron selected the Thurgood Marshall College fund, and Team Durant chose the United Negro College Fund as their charities. This is in accordance with the game’s theme, which was supporting HBCUs (historically black colleges/universities). The court of State Farm arena in Atlanta was decorated with symbols of education, to show the NBA’s support for HBCUs.

With the lineups altered and the starters on the floor, the first quarter began. The scoring began with Kyrie Irving hitting a deep three from the center to put team Durant up 3-0. After a driving dunk by Giannis Antetokounmp to get team LeBron’s first points, Jayson Tatum threw up a lob pass to Zion Williamson for the two-handed dunk. LeBron James then took the ball down the court for a reverse slam dunk. The scoring was off to a hot start from both sides. Later in the quarter Stephen Curry got the ball and was left alone in the corner. He shot the three and turned around to face the crowd as the shot went in, and the announcers (Marv Albert, Reggie Miller, and Chris Webber) went wild. Two minutes later LeBron got the ball and slung it out to Curry just past the half court line. Instead of driving to the hoop, Curry shot it from the All-Star logo on the court and made it, putting team LeBron up 26-23. Later LeBron got the ball near the hoop and bounced it off the ground up into the air, and Utah Jazz Center Rudy Gobert slammed it down for two points. Curry ended the quarter with 4 three-pointers. Team LeBron won the first quarter 40-39, and $150,000 was donated to the Thurgood Marshall College Fund.

The second quarter began with one of the shortest combined heights of a tip-off in All-Star history, between 6’0 Chris Paul and 6’1 Mike Conley, with Chris Paul winning it and giving it to Paul George. After a missed free throw by Jalen Brown, Mike Conley took the ball up to behind the three point line and threw it up in the air, for Jayson Tatum to catch it and slam it down with two hands to give team Durant an early lead in the quarter, 8-7. After Tatum later made a layup, Paul George threw the inbound pass across the court to LeBron, who dunked it from one step inside the free throw line for his 4th and final points. After two team Durant threes by Tatum and Beal, Jaylen Brown threw the ball off the backboard and caught it midair for the lay-in. Shortly after, Kawhi Leanord lobbed it up for Zion, who dunked it with two hands. With 4:30 on the clock, Steph Curry got the ball behind the three point line. After some good defense by Zach LaVine, Curry lost the ball but gathered it from the logo just past half court. He turned around and heaved it from midcourt, and somehow made it for another three pointer, and gave team LeBron another 31-28 lead. Also, throughout the quarter, Giannis Antetokounmpo made every shot he took. A three pointer with 2 minutes left in the half gave him his 22nd point, on 100% shooting. After a deep three by Damian Lillard, Steph Curry amazed the crowd again. Chris Paul was going to inbound the ball, but saw Curry cutting towards the hoop. He threw the ball from out of bounds towards the hoop, and 6’3 Steph Curry caught it for the alley-oop dunk. This was Curry’s 29th career dunk, and 3rd in his all-star game appearances. Going into the game, Chris Paul was second on the list for most all-star game assists ever, behind only Magic Johnson. But he ended the game with 16 assists, the Curry dunk being one of them, to take the record with 128 assists, ahead of Magic’s 127. As soon as team LeBron got the ball back, Curry dribbled to behind the three point line. It seemed like he was going to shoot it, but he inseat lobbed it up to the rim for no one else but Chris Paul. Paul caught it and rattled in the dunk. Paul is another rare dunker, and the announcers were shocked at the back and forth connection between Curry and Paul. Finally, with 20 seconds left in the half, Damian Lillard dribbled up to the half court line and heaved it. He made it from behind the mid-court line, and added three points to team LeBron’s score. Not to be outdone, Curry got the ball with 10 seconds left and made a shot from mid court, his seventh three of the half. This put team LeBron up by 19, with the half ending 60-41. Another $150,000 was donated to the Thurgood Marshall College Fund. LeBron James checked out of the game with 4 points and did not play for the rest of the contest. This technically breaks one of the most impressive streaks in NBA history. LeBron James has the all-time record for most consecutive games with 10 points or more, with over 1000 straight. But, his 4 point performance technically ended that streak. However, since the All-Star game is not a regular season game, his streak still stands in the eyes of analysts and scorekeepers.

The latter half of the game started with an easy dunk by Giannis and an alley-oop dunk from Luka Dončić to Denver’s Nikola Jokić. Following some deep three-pointers made by Bradley Beal and Luka Dončić, Giannis Antetokounmpo got the ball at the line. He has been shooting 28.5% for threes this season, and is known for his often airballs. At that point in the game Giannis had shot 15/15, and had two threes. The announcers exclaimed their disbelief at the shot, not wanting Antetokounmpo to lose his streak. But he banked the shot in to score his 35th and final points, earning him an NBA record for most points without a miss in an All-Star game. It’s lucky he wasn’t fouled, as he is not a very good free throw shooter either. With 5 minutes left in the quarter the score was tied at 28-28. Jame Harden of Team Durant swished a stepback three to give team Durant the first lead of the half. Team LeBron soon regained the lead, and went on a 9-2 scoring run in the next several minutes. Jaylen Brown then drained a tough turnaround three from the corner to give team LeBron a 40-33 lead. The score was 46-42 with 1 second left in the quarter, when Team Durant’s Donovan Mitchell made a deep three at the buzzer. The quarter ended again with Team LeBron in the lead, 46-45. The combined score at the beginning of the 4th quarter was 146-125 in Team LeBron’s favor. After consecutive made threes by Paul George and Jaylen Brown, with Brown making the shot while also getting fouled and making the free throw, Team Durant was losing by 20 points, and Team LeBron needed 18 points to reach the 170 point target score to end the game. Team Durant started making shots, and reached 147 points with threes made from Bradley Beal and Kahwi Leonard from. But it was no match for the shooting ability of Curry, who made another three-pointer for his 8th in the game on 52% shooting, and a deep turnaround three by Damian Lillard. With Team Durant down 20 points and Team LeBron needing only 3 points to win, Damian Lillard has the ball for Team LeBron. He took one step past halfcourt, launched the ball forward, and hit the shot. This pushed team LeBron to their 170th points and the victory against Team Durant, 170-150. $1,125,000 was donated to the Thurgood Marshall College Fund and $500,000 was donated to the United Negro College Fund.

This year’s All-Star game was packed with dunks, deep shots, and brand new records. Since the game, some new information has been found regarding LeBron James’ future as an All-Star captain. James has a 4-0 record in his All-Star games as a captain, and said in an interview by Laker Nation media source: “I hope that they allow me to retire from being an All-Star captain, so I can retire with a perfect 4-0 record. I’ll keep that forever. But we’ll just see what happens. I always try to pick the right team, and I’ve been lucky enough for four years to pick the right team. Guys go out and compete and play to win. I’ve been on the winning side of all four.” It is unknown who will take his place as west captain next year, but fans are already excited for the All-Star game next year which will be taking place at the Rocket Mortgage FieldHouse in Cleveland, Ohio.