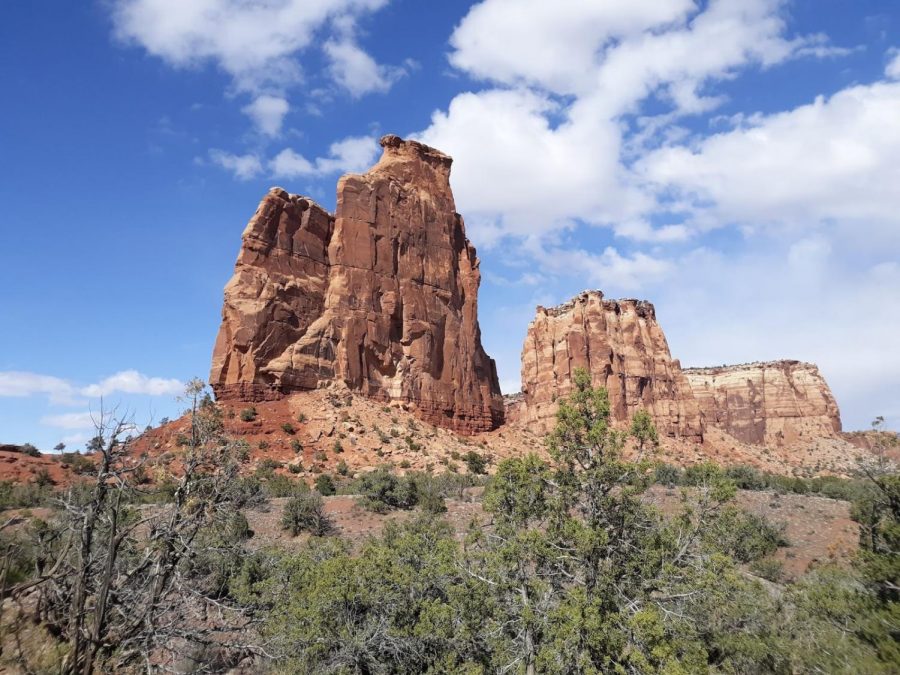 Colorado National Monument is located next to Grand Junction, Colorado. The park is host to stunning, 500-600 foot tall cliff walls colored in brilliant shades of white and red. A road, Rim-Rock Drive, travels along these canyons and gives a glance into the immense beauty found within them. Although this drive is spectacular, the experience of walking down into these canyons is much better, giving a bottom-up perspective on the cliffs. Monument Canyon is the main attraction of the monument, having most of the famous towers and pillars that characterize the area. This review will give an insight into the beauty of the area and will describe the trail that goes through Monument Canyon.

The route begins by scooting off the rim of the canyon. A switchback is traversed before an intersection is reached. This intersection marks the turn off for the Monument Canyon Trail, and the descent down into the depths of the canyon. From here, the trail switchbacks down off of the red rock cliffs and over an alcove. This alcove quite literally carries the trail on top of it, creating a precarious scenario where at any time the trail could break out from underneath and swallow you whole.

After this exposed section, the route switchbacks down a landslide and then crosses underneath the very alcove that you were just standing on. This truly makes the hiker realize the terrifying reality of the trail and the semi-primitive nature of it. From here, the route travels across to the other side of the canyon, scooting underneath massive cliffs. These cliffs hold small alcoves all across them, creating an incredible landscape, reminiscent of Canyonlands National Park in Utah.

The trail continues down the side of the canyon, switchbacking above small cliffs. The primitive aspect of this trail is noticeable here, as many sections of the route don’t have much room for passing. The reason for this? John Otto.

John Otto was the first caretaker of this monument. John was a person who explored this area and felt that it should be protected. When the monument was finally created in 1911, John built most of the trails around the monument, including the Monument Canyon Trail. For this reason, some of the routes may not be up to 21st century standards and may be sketchy in certain areas. With this being said, the route finally makes its way to the bottom of the canyon, where it meanders along the base of the steep cliffs. The spectacular nature of the area is incredible, as tall, sheer walls line the sides of the canyon, with the occasional massive spire interrupting the flow of the cliffs.

After a bit of hiking, you round a corner and are greeted by the massive spire known as the Kissing Couple. This spire is 450 feet tall and is an impressive sight when viewed from afar and up close. In the distance is Independence Monument, the most recognizable monolith in the entire park. This area is one of the most spectacular in the entire canyon because of its stunning views. Take a rest here, admiring the massive scale of the spires and structures that abound across the monument. When ready, continue on.

The Kissing Couple is an incredibly beautiful structure, composed of the beautiful sandstone the monument is known for. It is a classic example of erosion, as the spire was slowly eroded away from the canyon wall, eventually causing it to form into its current shape. A climber’s trail scoots up to the base of the tower, letting you get close to it. The ground that this trail sits on is soft and unstable, so proceed with caution.

Standing underneath the huge mass that is the Kissing Couple, the fragile nature of the rock structures that exist in the monument becomes quickly apparent. The Wingate Sandstone that forms the great cliffs and walls of Monument Canyon sits on top of the Chinle formation, a soft and crumbly type of rock that forms the massive debris piles at the base of the cliffs. At the Kissing Couple and other major rock formations, the Chinle formation has eroded out from underneath the Sandstone, causing it to overhang above the ground. This truly makes for an experience like no other; sitting underneath the spire, admiring the vast canyon, while being constantly reminded of the never-ending game of gravity, waiting to bring the entire tower down upon you in one swift motion. The landscape spreads out in front of you, non-moving, and yet, it could fall apart at any moment. Incredible.

After the short detour to the Kissing Couple, continue down the trail, admiring the huge canyon walls. In front of you is Independence Monument, the symbol of many shops in the Grand Valley and the icon of the park. This incredible structure is 400 feet tall and separates Wedding and Monument Canyons. From a distance, the rock seems to be eroding away from the sidewalls of the canyons, giving a hint of its past.

Independence Monument was originally a wall that divided two separate drainages. Over time, the forces of erosion cut away at the behemoth of rock, tearing it apart one minuscule grain of rock at a time. Eventually, the connection to the canyon walls was severed, leaving the huge rock we know today. In time, the rock will eventually crumble to the ground, and there will be nothing left of it. With all of this being said, it is possible to climb to the base of the monument. Simply pick your way up through the endless debris field at the base, and then find a rock to sit on. Take in the landscape; you can see the entirety of Monument Canyon from here. Spires tower off to the right, with the Kissing Couple once again in view.

Enjoy the view for a bit. When ready, climb back off of the debris field, and then continue on the trail.

After a bit of hiking, another junction will be reached. This junction is where the Wedding Canyon Trail splits off from the Monument Canyon Trail. Wedding Canyon is named because of John Otto. To quote the park service “John Otto married Beatrice Farnham on June 20, 1911 at the base of Independence Monument. Unfortunately, John and Beatrice’s marriage was short-lived. Beatrice found the reality of John’s life to be far from her romantic ideal. A few weeks after the wedding, she left, never to return. ‘I tried hard to live his way, but I could not do it, I could not live with a man to whom even a cabin was an encumbrance.’ Beatrice Farnham Otto”. Jeez. Nevertheless, Wedding Canyon was named in honor of their wedding, and so, over 100 years later, the canyon still bears the name. Continue down the Monument Canyon Trail, not turning at the intersection.

Scooting off of the plateau, the canyon walls continue to follow alongside you, bending downwards. This section of trail is beautiful, with the tall walls towering over you. Eventually, though, you’ll reach the end of the canyon country, and will have to slog along for one mile. At the end, the lower trailhead will come into view, where a buddy will be to pick you up. If not, it’s about six miles back.

The hike through Monument Canyon via the Monument Canyon Trail is the quintessential trail through Colorado National Monument, offering up grand views of the surrounding terrain. Don’t forget to bring water, a friend, and to tell people where you’re headed. Oh, and have a good hike! This is some of the best canyon country in all of Colorado.