I Am In Eskew – a Horror Podcast to Make You Dizzy 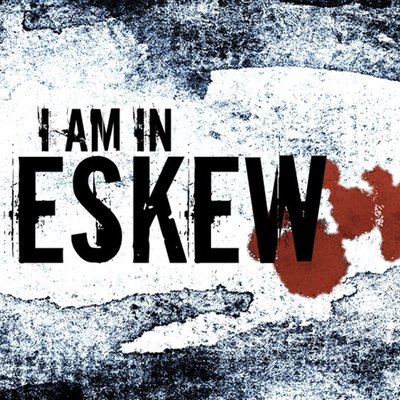 With 155 million Americans listening to a podcast every week and horror firmly in a “golden age” of both critical acclaim and box office revenue, there’s no better time to be in the audio horror drama business. The production company Rusty Quill can confirm this; their podcast The Magnus Archives, created by Jonathan Sims and Alexander J Newall, is reaching its final episode after having amassed a cult following and an average of 4 million downloads a month, as of July 2020. From 2012 on, horror podcast Welcome to Nightvale (written by Joseph Fink and Jeffery Cranor) garnered similar acclaim and following with 8.5 million downloads in one month in 2015.

So, all of this considered, why is the horror audio drama masterpiece I Am In Eskew still practically unknown? In my opinion, that’s just one more fitting addition to the bitter depths of the city it is set in.

I Am In Eskew follows one David Ward as he struggles to survive in the titular city that hates its occupants. Drowning in shadow and untethered from reality, the streets warp under one’s feet in a curtain of perpetual rain. As David tries to survive in the city, his senses of both morality and mortality dissolve and he becomes further unhinged from his identity, the real world, and the concept of being human. Meanwhile, a private investigator named Riyo has been hired to find David, but she must decide how deep she’s willing to dive.

Each episode is its own smaller horror story telling of an event David witnesses in Eskew, as well as part of the larger story arch as he tries to fight back against the city and Riyo tries to find her way in.

A laundry list of content warnings accompany the podcast—even for horror, it’s intense. While a more exhaustive list broken down per episode is available here, it suffices to say that almost every episode contains a healthy dose of body horror, many have substantial gore, and others contain suicidal ideation and reference to murder. If you’re new to horror or have specific themes and fears you’d rather avoid, I would definitely recommend you check out the list of warnings before beginning to listen.

Still, that said, Eskew doesn’t rely on graphic violence or jumpscares to get under a listener’s skin. The images presented are striking (I still have the concluding scene of episode one seared into my mind); the characters are multidimensional and sympathetic despite the atrocities they commit during their fight for survival. Each story is unexpected and often as beautiful as it is grotesque.

Despite being entirely produced by an anonymous team of two each episode sounds fittingly eerie, grave, and hollow, with the perfect cinematic pauses for suspense. The low budget, which leaves room for soundscaping only as complex of a 20 second loop of rain, does not hinder the project in the slightest. Instead, it corroborates the story that Eskew is made up entirely of recordings made by David and Riyo.

But none of that is what makes Eskew stand out so clearly to me against a solid backdrop of other podcasts and horror media. What makes Eskew so special, I believe, is how it steps outside the realm of simply showing us what we might find scary, and instead digs into a listener’s head, making them ask themselves again and again, what if that was me? There’s no escape to be found in Eskew because, in the same way the city tortures David by digging up his past, the podcast won’t leave a listener to stand passively by. What would you do? It begs. Again and again, the idea of complacency, in particular, is thrown into question. What does it mean to survive? What is survival worth? What are you worth? David Ward doesn’t know the answers to any of these questions, and he definitely isn’t willing to shield you from them. Meanwhile, Riyo has her own set of questions. Her story asks, more subtly, what you might do in order to feel whole; in order to feel like a real person; in order to feel like you’re in the right place.

Ultimately, I believe that horror isn’t about showing someone something frightening and having them jump; instead, horror is about scaring someone from the inside out, planting a seed and letting it take them somewhere horrific. And that’s exactly what I Am In Eskew manages time and time again.

I Am In Eskew is available to listen and download on Spotify, iTunes, and Podbay.