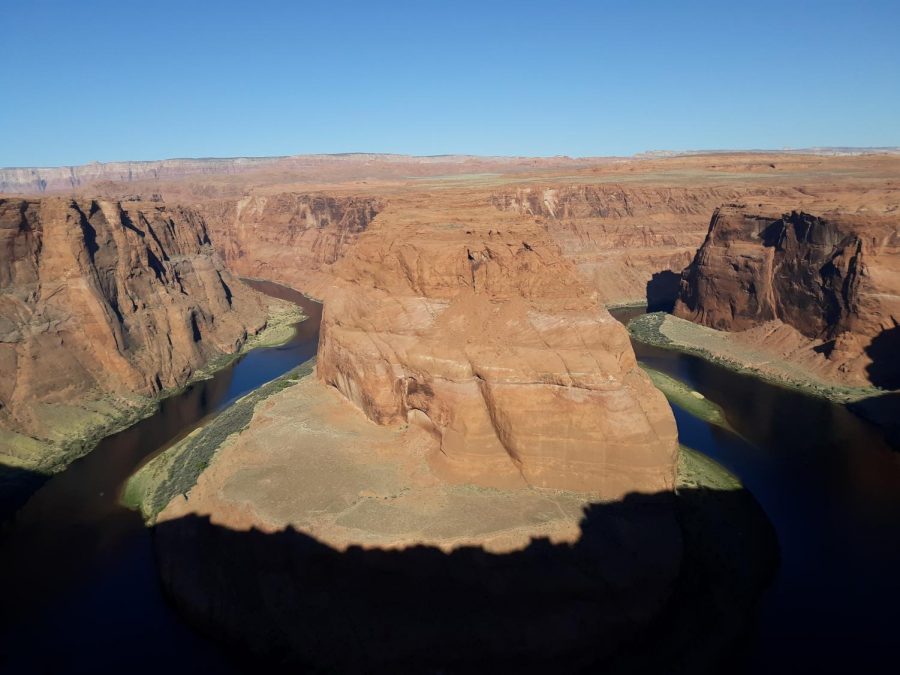 Horseshoe Bend is a deep gash in the surface of the Earth, created by the mighty Colorado River. Located in Glen Canyon National Recreation Area, the bend is a short, 0.7 mile jaunt over from the nearby highway 89. Due to its proximity to Page, Arizona, Horseshoe Bend has become a popular spot, garnering an audience of more than 2.2 million people a year. This audience is not unwarranted; the overlook is a beautiful spot. With this being said, let’s get into the hike.

Begin by walking out of the large parking lot, following the ADA accessible trail. Unless arriving on a cold, snowy day, the trail will most likely be filled with people. This can be an annoyance to some, but such is the nature of the overlook. Push past the obnoxious humans, talking loudly into their cell phones or a nearby friend. Many people, instead of sticking to the literal paved pathway, opt instead to go “experience nature” by trampling the native desert plants that exist around the overlook. Why? Why must we desecrate the very lands we seek to protect? I ask you this question in vain; many won’t do anything to stop the destruction of our public lands, and instead choose to join in on the chaos, killing the very heart of these incredible areas. Don’t be one of these people.

A couple of rest stops are located along the trail.  If too many people are passing by you, sit down at one of these and enjoy the views of nearby cliffs. These cliffs are part of the Grand Staircase, an incredible formation of cliffs and canyons that spans 200 miles. To quote the Bryce Canyon National Park Website “The Grand Staircase is an immense sequence of sedimentary rock layers that stretch south for 100 miles (161 km) from Bryce Canyon National Park through Zion National Park and into the Grand Canyon.

The many layers of the grand staircase, viewed from Desert View in the Grand Canyon. Photo by John Kowalski.

In the 1870s, geologist Clarence Dutton first conceptualized this region as a huge stairway ascending out of the bottom of the Grand Canyon northward with the cliff edge of each layer forming giant steps. Dutton divided this layer cake of Earth history into five steps that he colorfully named Pink Cliffs, Grey Cliffs, White Cliffs, Vermilion Cliffs, and Chocolate Cliffs. Since then, modern geologists have further divided Dutton’s steps into individual rock formations.” This amazing area of sedimentary rock is located solely on the Colorado Plateau, a massive formation some 240,000 square miles in size. ll. These cliffs, of course, just so happen to be the very ones you are gazing at, acting as watchers over the deep Horseshoe Bend. Gaze across at them in awe, and then continue onwards to the bend.

After a short walk from a parking lot, the beauty of the overlook hits you like a brick. A small platform was constructed at the rim, allowing hikers to peer over the edge into the abyss. This helps to prevent further fatalities as many have occurred due to the unstable nature of the surrounding sandstone. People who’ve gotten too close to the edge suddenly find themselves in a predicament, where death is inevitable. Don’t be one of these people. With this being said, humans aren’t the only things that have found themselves tumbling off the edge, into the void. Looking below the railing, a dozen or so phones can be found, each of them 400 feet below the actual overlook. Furthermore, trash is littered everywhere, with many clearly not caring about protecting the area. This seems to be a trend, the destruction of natural beauty, as just upstream from here lies the Glen Canyon Dam. Glen Canyon used to be one of the most spectacular areas in the entire West. Once considered to be a rival to the Grand Canyon itself, Glen Canyon is now forever lost underneath the blue waters of Lake Powell, a reservoir which has a capacity of 26 million acre feet. An acre foot is enough water to sustain 4 people for an entire year. This reservoir covers the majority of Glen Canyon, with very little of the original gorge still being visible. Horseshoe Bend is one of the last intact areas where you can still see the magnificent, red walls of the once grand Glen Canyon.

The magnificence of the area is lost after 8:00 in the morning, when everybody decides to get up. But, that’s just a given in an area so small as Horseshoe Bend. After all, 2.2 million people is a lot.

Horseshoe Bend is an incredible place, worthy of your attention. Bring water, bring along a friend, and tell people about where you’re headed. Also, don’t expect a “natural” experience. There’s a lot of people, and there’s a decent amount of trash. With this being said, it’s still a really gorgeous place. Don’t let this deter you from heading there, it’s still worth it. Have a nice hike!