Lorde Drowns in the Sun – A Solar Power Review 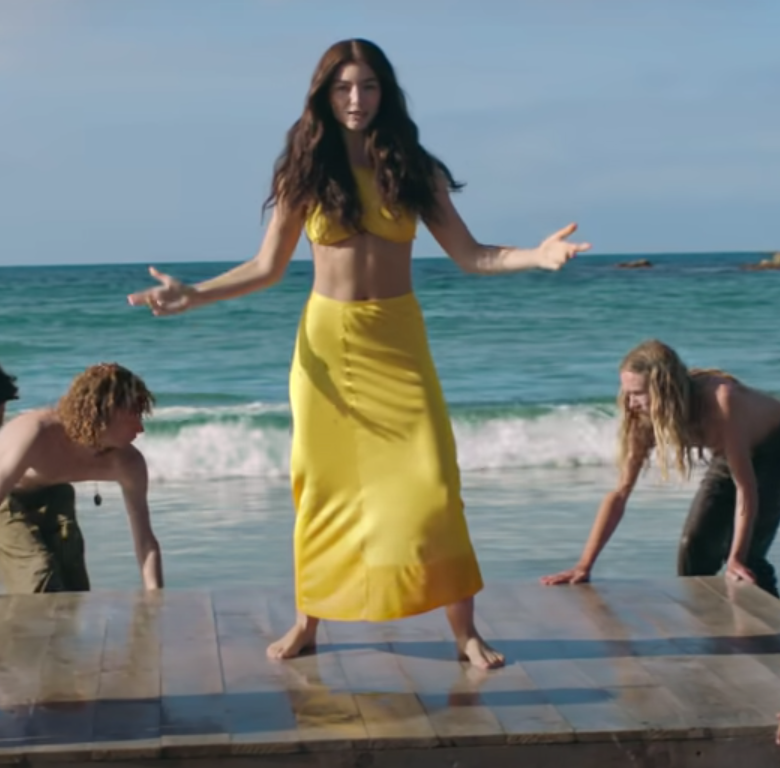 From the music video for the June 10th 2021 single release of the titular track “Solar Power”.

Only sixteen at the release of her first song, Lorde skyrocketed to fame with her 2013 single “Royals”, which was quickly followed by her first full length album, Pure Heroine. With Royals keeping number one on the charts for two full weeks and winning Song of the Year at the 2013 Grammys (“Pure Heroine” was also nominated for Best Record of the Year), Lorde still didn’t get caught up in the tide of fame, waiting four years to come back with her 2017 album Melodrama. Melodrama received similar critical acclaim, institutional and personal, with high praise from pop giant Taylor Swift. In 2013, according to his longtime pianist Mike Garson, David Bowie himself referred to Lorde as “the future of music.”

Solar Power was produced by long-time producer and co-songwriter Joel Little as well as Jack Antonoff, producer of chart topping, massively popular artists Phoebe Bridgers, Lana Del Ray, and Taylor Swift. The album was inspired, according to Lorde, by weed, her complete break from social media and the internet, and her travels over the past few years.

“[…] It’s a weed album. It’s one of my great weed albums,” said Lorde in an interview with the New York Times preceding the album’s release.

Also listed in the interview as Lorde’s inspirations for the album are her recently deceased dog, Pearl, her new boyfriend, guitars, her “personal evolution,” growing up, and her 2019 visit to Antarctica.

The first thing that struck me about the opening track and stayed with me throughout the album was the sense that I was being slowly immersed in an unpleasant vocal smoothie. Almost every song is barren of Lorde’s once-signature half of her voice, her much deeper second range with a gravelier, more cutting edge. In songs “The Path,” “California,” and “Man with the Axe” in particular, Lorde’s voice is muffled beneath layers of floaty instrumentals in the same high, humming, bell-sweet tone as her falsetto, which is kept strictly in its first, highest range.

Punctuated by chimes and trills, the goal of these backing tracks are a mystery to me– with how they cover Lorde’s voice and the lead guitar, my best guess is that they’re designed to create a psychedelic, misty atmosphere. They fail. Rather, they leave your ears straining to decipher Lorde’s words.

If you can manage to dig through the feathery layers, the lyrics aren’t much of a reward. Often stunningly superficial (“No shirt, no shoes, only my features. My boy’s behind me; he’s taking pictures,”) directly contradicting or too obviously fitting the song’s themes (“We’ve been through so many hard times. I’m writing a love song for you, baby,”) or so out of place and abrupt they startle or amuse without emotional impact (“It’s so strange to see you smoking marijuana,” and “I’m kind of like a prettier Jesus”).

Some lyrics are just cringeworthy, plasticky, purely bad— whatever you wish to call them, there’s no way to justify the lines “throw my cellular device in the water” and “wearing SPF 3000” when they come from a once-poignant songwriter in the year 2021.

Songs that particularly emphasize this shallow writing are “Fallen Fruit,” “Man With an Axe,” “Leader of a New Regime,” and “Dominoes.” If you decide to listen to the album, I’d recommend skipping these so you won’t be too distracted rolling your eyes to give the rest of the album a fair shot.

While I can generate as many grouchy one-liners as I want– and believe me, I have more– it bears mention that some lyrics, particularly those referencing her personal evolution and the process of growing up famous, do hit a target. “Everyone wants the best for you, but you have to want the best for yourself,” she sings in “Secrets from a Girl (Who’s Seen it All).” In “The Path” she describes herself as a “teen millionaire having nightmares of camera flashes” which, though unrelatable, kind of slaps. “Well, my hot blood’s been burning for so many summers now. It’s time to cool it down, wherever that leads,” she sings in “Stoned at the Nail Salon,” one of the few songs where her vocal prowess and deeper auditory edge are allowed to shine.

Still, even “Stoned at the Nail Salon,” one of the less objectionable songs, feels the need to contradict itself, playing down its message– Lorde muses about superficial internet fame and society’s prioritization of Good Bodies Online™, then immediately contradicts herself: “Or maybe I’m just stoned at the nail salon again.”

The opening of “Secrets from a Girl (Who’s Seen it All)” left me hopeful, considering one of the few themes of the album seeming remotely potent thus far were Lorde’s experiences growing up famous, but let me down further and further as the song meandered along.

Nearing the end, the buried vocals are cut through with a surprise: a spoken word semi-poem about girlhood from a fabricated flight attendant over a plane speaker system. “I will be your tour guide today. Your emotional baggage can be picked up at carousel number 2. Please be careful so that it doesn’t fall onto someone you love,” the voice (not Lorde’s) reads. “When we’ve reached your final destination I will leave you to it. You’ll be fine, I’m just gonna show you in, and you can stay as long as you need to get familiar with the feeling.”

The song is not objectively bad– in fact, it’s by far one of the best on the album tonally, lyrically, and instrumentally. But it can’t escape a dated weight, stuck in the early 2000s. Lorde has created what would’ve been a good song in whatever period when growing up as a girl was still defined by house parties, gossipy sleepovers, and the powdery wanting to be wanted.

This isn’t to say those feelings don’t still exist today, but they’ve undeniably metamorphosed, pushed along by societal emphasis on making every part of yourself marketable, growing political awareness, and peculiar pressures of knowing every time you look to the horizon you’ll likely see an apocalypse on its way.

In “Mood Ring,” Lorde attempts to satirize modern culture of, as she put it in a statement sent to fans subscribed to her newsletter, “spirituality, pseudo-spirituality, wellness, pseudo-wellness. Things like eating a macrobiotic vegan diet or burning sage, keeping crystals, reading tarot cards or your horoscope.” She references parallels to 60’s woman flower-child culture, seemingly forgetting the anti-war spark of 60’s hippie culture and anti-establishment charge. If the song is truly meant to satirize modern, highly marketed health culture, it does so without any clarity or punch, blending together with the rest of the album, which seems well within the parameters of the culture this song allegedly attempts to criticize. “Ladies, begin your sun salutations; transcendental in your meditations (love and light). You can burn sage, and I’ll cleanse the crystals; we can get high, but only if the wind blows (blows just right),” she sings, with the same cloying opulence the rest of the album has already taught you to expect.

Hearing an album about a rich woman’s travels to exotic and peaceful locations, her experiments with weed, and her certainty in the new religion she’s carved out of a world she’s deemed too chaotic to be relevant is simply irritating, provoking righteous jealousy– why does she get to escape like that?

During periods of social reckoning and calls for revolutionary change, hearing “and we will walk together, psychedelic garlands in our hair through the halls of splendor where the apple trees all grew,” is not interesting or psychedelic or new, just tone deaf. During the fourth, mutated wave of a global pandemic, no one really wants to hear about a multimillionaire frolicking at least mostly naked on a beach. Sounding constantly affluent, while not a moral flaw in and of itself, is still deeply annoying.

I’m not mad that Lorde is happy now. I’m not mad she’s growing up, changing as stylistically and as a person. I’m sad because– like everyone else– I wanted music that is good; waited four years for this album to not deliver. “All the music you loved at 16 you’ll grow out of,” Lorde sings in “Stoned at the Nail Salon,” aptly describing the album. I’m 16 right now, but the statement stands: we’re all growing up, seemingly too fast for Lorde to handle.