A New Push for Gun Control 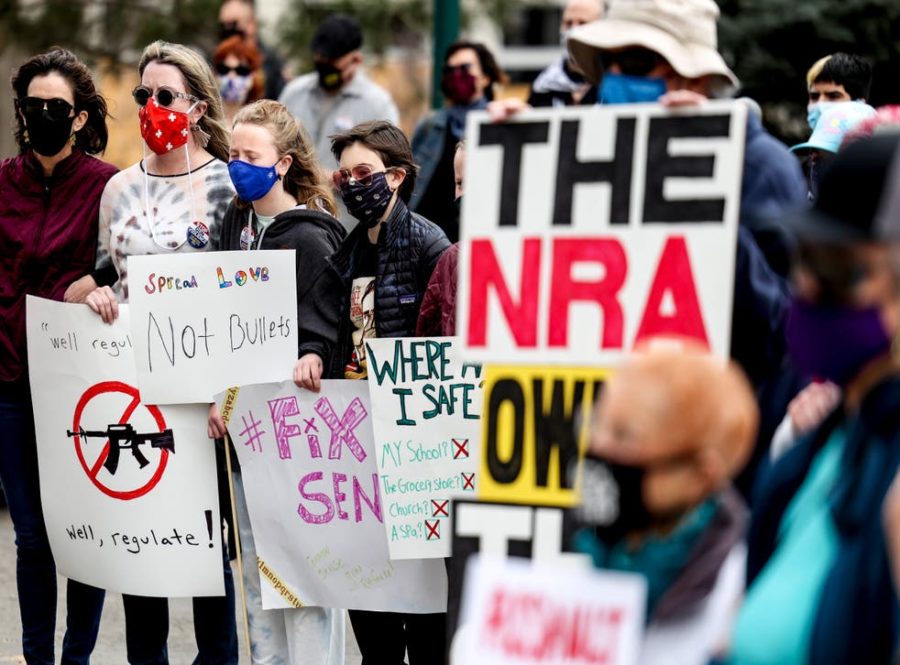 Fairview students Annabelle Katz (junior) and Samuel Johnson-Saeger (senior) are interns with Colorado House Representative Judy Amabile, who represents the 13th District. This year, they’ve spent time on policy research and summarization for the Representative. They spoke, alongside Representative Amabile, to the Banner about their research and work on these three bills.

House Bill 1298 (HB21-1298; full text here) was written to close the “Charleston loophole”, coined after the 2015 Charleston Church Shooting, in which a shooter killed 9 at a church in South Carolina. “The Charleston Loophole allows people whose background checks take longer than three days to just obtain a weapon without that background check coming through,” summarized Katz. According to the Center for American Progress, an organization that provides information on progressive policy, the Charleston shooter would not have been able to purchase his firearm if said loophole had been closed.

The National Rifle Association (NRA), a pro-gun lobbyist block, however, claims “The 3 day proceed to sale provision is a safety valve that ensures gun purchasers in the U.S. are not arbitrarily denied their Second Amendment Rights. Without the 3 day provision, the FBI has no incentive to complete checks in a timely manner.” However, according to the NICS (National Instant Criminal Background Check System), most background checks come back within under 8 minutes and can be performed while the prospective buyer is standing within the retailer.

“People whose background checks don’t come through in the three days are four times more likely to have their background check rejected,” said Katz, supporting her claim with a compilation of NICS data from 2015-2019.

House Bill 1299 (HB21-1299; full text here) established the Office of Gun Violence Prevention and allocated  $3,000,000 in funding to it. The office’s primary stated purpose is “to coordinate and promote effective efforts to reduce gun violence,” as declared by Colorado legislature.

“I actually think [HB21-1299] might turn out to be the most important thing we did last session. Because when you say how do we stop these school shootings from happening? The answer is we really don’t know how to stop that. We need to understand what is motivating somebody to do that. What are the things that are indicators that they might, and then what actions can we take as a matter of public safety,” said Rep. Amabile, who sponsored the bill. In addition to Democratic lawmakers, groups such as Giffords Law Center to Prevent Gun Violence, Colorado Ceasefire, and Moms Demand Action collaborated to research and draft the bill.

In addition to research, the office will be tasked with public education on gun safety legislation, leading the NRA to label the office as a “[Generator of] propaganda promoting the erosion of Second Amendment rights.”

“We should be looking at this as a public health and safety crisis in our country,” said Rep. Amabile. “And that’s exactly what the Office of Gun Violence Prevention is going to do. (…) Their charge is to do things like publicize the red flag law.”

The “red flag law” (formally known as Extreme Risk Protection Orders; HB19-1777), passed in 2019, allows for a family member, a household member, or a law enforcement officer to petition the court to prevent a person from “possessing, controlling, purchasing, or receiving a firearm for 364 days.” This law is designed to prevent those who present “clear and present danger” to themselves or others from perpetrating violence with a firearm.

Other bills were also passed on reporting lost or stolen weapons and prohibiting those with a domestic violence conviction from purchasing a firearm.

While this legislation is designed to decrease mass shootings, which regularly receive considerable media attention, it also intends to combat smaller-scale incidents of gun violence.

This was corroborated by Rep. Amabile: “In our state, every day, people are dying from gun violence. We call it everyday gun violence, and (…) there’s a lot more people dying from that. And so that’s another area where we really need to have a focus. The other thing, the most common type of gun violence that ends in death is suicide.”

One bill written specifically to decrease suicide by gun is House Bill 21-1106 (HB21-1106, full text here), the Safe Storage of Firearms law. The bill “requires that firearms be responsibly and securely stored when they are not in use to prevent access by unsupervised juveniles and other unauthorized users,” creating the offense of unlawful storage of a firearm if a person under 18 can access the weapon without permission. The law requires all firearms be sold with a locking device so that the firearm can be secured and only unlocked by the owner.

Both Katz and Amabile mentioned statewide improvements in mental healthcare, one of the key pieces in decreasing everyday gun violence. “Oftentimes one can get a gun quicker than you can get in to see somebody for help,” said Katz

Representative Amabile also cited an improved mental healthcare safety net as a way to decrease and prevent both mass and every day gun violence.

“These mass shooters; almost all of them have some underlying mental health problems that contributed to them committing the crimes that they committed,” said Rep. Amabile. “(…) We’re doing absolutely nothing for people with schizophrenia and bipolar people with psychotic episodes. We have a massive amount of people living on the street who have those illnesses. Our jails are full of people with those kinds of mental illnesses.”

Efforts to improve access to mental healthcare for those with severe mental illness include the April 22nd passage of House Bill 1097 (HB21-1097, full text here), which creates the new Behavioral Health Reform taskforce, of which Rep. Amabile is a part.

“We have $450 million to spend on transformational change to our mental health care system, and so I’m very interested in where we end up on that and how we treat people with the most severe mental illnesses. Because right now, a lot of those people aren’t getting treatment at all,” said Rep. Amabile. “[Severe mental illness] is hard to treat. And it’s expensive to treat. And it’s very challenging on a lot of different levels, that doesn’t mean we should throw up our hands and give up, we’ve really got to address it.”

At the conclusion of her interview, Rep. Amabile addressed Fairview students directly:

“It’s not okay that you all have had to do all these active shooter drills, and that this has been a part of the landscape,” said the Representative. “And this isn’t the case in other countries. They just don’t experience this the way we do. And so we’ve got to figure it out, what are the underlying issues that are making this so common in our country? And then we are going to need you all to really advocate for change.”