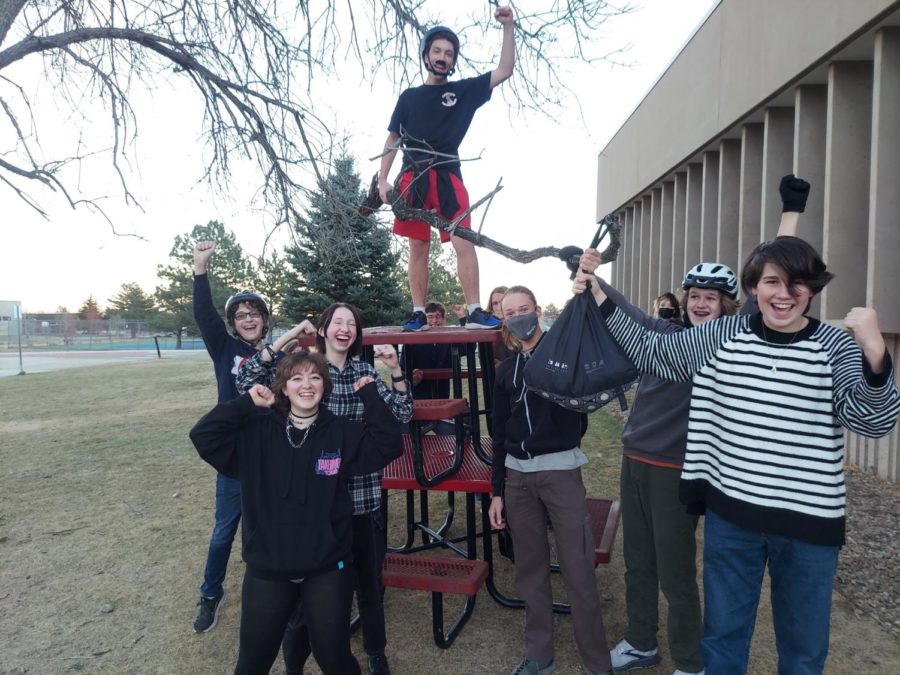 The students who worked together holding the retrieved bag triumphantly.

On December 2nd, at approximately 4:04 p.m, a group of students encountered a problem. Jude Barone, a 9th grader, found that he had lost his bag up in a tree located near the back of Fairview: “I threw my bag” said Barone. The stuck bag, to say the least, intrigued the other students, enough to gather around the tree. Carl Travis, another 9th grader, found it “very entertaining”. Looking up at the tree, there was indeed a bag, strung high up on a branch, out of everyone’s reach.

At first, the students were confused on what to do. Some vaulted small pebbles at it, others threw larger objects, until eventually a water bottle was found to be most efficient at retrieving the item. The bottle was chucked at the bag multiple times, occasionally getting within close range. Sometimes, the bag would be hit by the water bottle, however it was never close enough to free it from the clutches of the tree.

While this was occurring, a new student entered the scene: Lucas Flensburg Larsson. He opted to climb up into the tree, attempting to gain a better vantage point from which he could attempt to assist with retrieving the bag.

From this new position, Lucas attempted, many times, to secure the bag. He first grabbed a stick, and tried to grab the luggage with it. This attempt was futile, and ended up failing. From here, he was given a frisbee, which was then thrown at the bag multiple times, before it unfortunately  ended up on the roof of the school.

The group continued to lug a water bottle at the bag. Funnily enough, this water bottle was owned by Jude Barone, the very same student who threw their bag up into the tree. However, these students were not just going to continue to throw a water bottle up, hoping for some miracle to occur.

They were going to make it occur themselves.

Quickly they rushed to the tables near the parking lot at the back of the school, picking one up. Carl Travis, alongside Lucas Flensburg Larrson, Kaden Kelly, and Raye Sarnosinski, all carried the table over to the tree, before realizing that one table could not offer enough height to reach the bag.

The only possible option for this group of students…

Yet another squad, composed of Lucas Flensburg Larrson, Carl Travis, Alan Leyk, and Ivy Spataro carried the table over to the other table, and proceeded to create a stack of outdoor furniture.

Elliot Pease, a sophomore, opted to climb on top of the stack of tables, while all the other students stabilized the makeshift structure. He grabbed onto a tree branch, tried to get the bag with said branch. However, this was done in vain, as the branch was simply too short to reach the luggage.

Of course, this couldn’t be the end.

Because Lucas Flensburg Larrson walked over…

With a massive tree branch.

(No damage was done to a tree when obtaining the branch).

Elliot descended the stack of tables quickly, while Carl climbed on top, and grabbed the branch given to him by Lucas. He stabbed the bag with the branch, managing to get it off of the tree. Finally, after 25 minutes of grasping at a bag, Carl held it victoriously at the end of the stick, alongside Lucas, Jude, Kaden, Elliot, Alan, and all the other students who helped in the ordeal.

After the luggage was retrieved, the students promptly returned the tables to their original positions, excited about what they had just accomplished. Lucas put the stick away in a dumpster; it didn’t fit all the way.

Everything was put back the way it was before Jude had gotten his bag stuck in the tree.

Carl remarked that “this was the craziest, funniest thing that has happened to me today,” while Ari, a 9th grader, said “that was insane, and I can’t throw to save my life”.  Overall, all of the students that helped with the bag retrieval process showed that they could put everything aside, even when they didn’t know each other, and help a person get their bag out of a tree. The selflessness found in these people was amazing, and was a leading example for all young adults out there.