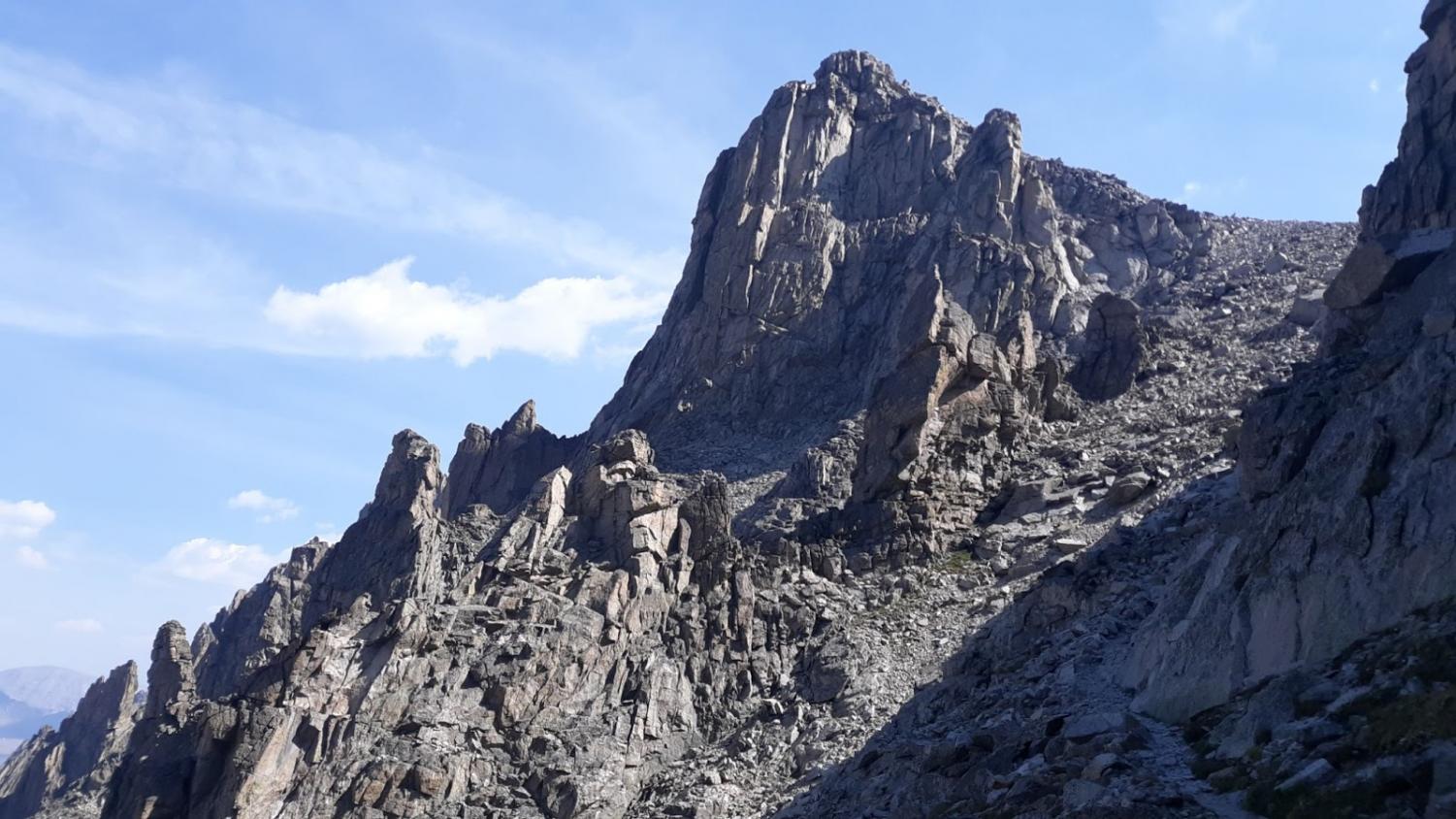 A Cliff on the West Side of Pawnee Pass (Trail on the bottom right). (John Kowalski)

A Cliff on the West Side of Pawnee Pass (Trail on the bottom right).

The Continental Divide is one of the most fascinating features of the North and South American Continents. It divides the watersheds of the Pacific and Atlantic oceans, following major mountain ranges such as the Andes and the Rocky Mountains throughout its course. The trail described below crosses from one side of the divide to the other, totalling approximately 16 miles. The scenic quality of the terrain is truly spectacular, and offers up an incredible experience to all who choose to attempt it. As always, careful planning is key to have a successful and fun trek through the Indian Peaks Wilderness, as a good chunk of the trail goes through unprotected alpine tundra, which is constantly being ravaged by the elements. With all this being said, let’s get into the ridiculously spectacular route that is Brainard Lake to Monarch Lake.

Begin at the Long Lake trailhead, which is located inside the Brainard Lake Recreation Area. Follow the trail alongside Long Lake, which, true to its name, is a long and lengthy lake. This section of trail is rather mundane compared to the rest of the route, but is still beautiful in a subtle manner. After about 2 miles, you’ll start heading up, passing a waterfall or two along the way. This short climb ends abruptly, with Lake Isabelle popping into view.

The beauty of the area hits like a wave, knocking you backwards as you look at the steep, jagged cliffs surrounding the lake and valley. Take a rest here and find a spot alongside the banks of the lake. Enjoy the mountain air. Look at the views. When ready, continue onward up to Pawnee Pass (follow the signs).

The climb up to Pawnee Pass is steep, winding in and out of flower-filled meadows and beautiful forests of pine trees. Switchbacking up and up, glimpses of the alpine beauty of the Indian Peaks are seen every now and then, but for the most part are hidden behind trees. At around 10,000-11,000 feet, this all changes. The treeline goes away, revealing a spectacular line of cliffs that make up the South face of Little Pawnee Peak. From here on, the entire route up to Pawnee Pass is above the treeline, making the views of the surrounding mountains amazing.

After a short while above treeline, steep switchbacks begin to cut their way up a ridge in front of you. These switchbacks are decently demanding, and require a considerable amount of effort when ascending. The views continue to open up, until you reach an alpine bench. This flat area of land goes on for about 1 mile, with spectacular views being everywhere you look. Off to the side, if one takes extra precautions, you can get an amazing view of Lake Isabelle from above. Once again, to get to this viewpoint requires extra precautions, as steep vertical cliffs line the side of Lake Isabelle.

Back on the Pawnee Pass trail, the route continues to cross the alpine tundra, giving sweeping views in all directions. Finally, after crossing the tundra, an ascent up a boulder field via switchbacks occurs. This final section before reaching the pass is difficult, as you may already be considerably tired out after climbing the first set of steep switchbacks. However, it’s all worth it in the end, as the final summit plateau comes into view after the switchbacks. Simply hike over to the gigantic wooden sign marking the Continental Divide.

Standing on top of the pass, a sense of grandeur not really found elsewhere in Boulder  County is achieved. The Continental Divide, stretching from the tip of Alaska all the way down to the Southernmost Point in South America, is directly underneath your feet. Looking off the west side of the Pass, huge mountain walls, some 2,000 to 3,000 feet tall, soar above the Pawnee Lake Basin below.

The Pawnee Pass trail winds its way down off of the cliffs of these mountains, like a tiny line in an infinite sea of loose boulders and scree. This section of the trail is actually decently sketchy, and offers up one of the most incredible views anywhere in the Indian Peaks Wilderness. The beginning of the descent into the basin is clearly the site of many a rock slide, as the trail has been wiped out, forcing the hiker to pick their way down through the scree and talus. On either side of the trail are huge, granite spires, some 20-50 feet tall. These spires surround the Pawnee Lake Basin and create an iconic view not found elsewhere in the Indian Peaks. The trail continues to descend down into the basin, passing by a gigantic granite wall. The trail continues to wind down the side of the mountain, with the immense size of the mountainous surroundings being fully realized.

After numerous switchbacks, the alpine tundra is finally reached again, and the relentless grade evens out, allowing a gentle descent down to the lake. Above, the trail can barely be made out, as thousands of boulders, many on the edge of collapse, obscure the view. The route enters the trees, where multiple social trails make their way over to the shore of Pawnee Lake. From here, the view is incredible, giving a surreal look at the peaks and cliffs surrounding the basin, making for a great place to stop and eat lunch. Enjoy the panoramic views. Drink some water. From here, it’s all downhill, and this is one of the last alpine stops you’ll have.

After hiking through the incredible alpine terrain that is iconic to the Indian Peaks, the final 8 miles or so of trail are mundane and bland, scooting through a tree-filled valley. With that being said, the final exit out of the Pawnee Lake Basin is utterly breathtaking, as Lone Eagle Peak rises dramatically off to the South. This view of Lone Eagle is reminiscent of mountains found far up north, such as the sheer monoliths of Glacier National Park. From this final viewpoint, the trail switchbacks down to the junction of Pawnee Pass and Crater Lake. Crater Lake is located at the base of Lone Eagle Peak and is one of the premier backcountry lakes in the Indian Peaks. With this being said, the extra 2 miles adds about 1 and a half hours to an already 9-hour long hike, so this turn-off is only for truly keen hikers.

Descending down from this junction, one final grand view of the cliffs above the valley is seen, before the trail enters the trees.

Once in the trees, multiple waterfalls cascade down beside you, and for the next 6-8 miles, the insanity of this hike will become quickly apparent. The never-ending switchbacks down the valley are almost disheartening, as there is no indication that the trail is coming to an end. If wanted, a dip in the cool of the waterfalls may be warranted on a hot summer day. Otherwise, it is a good idea to push onwards, as the valley goes on much longer than the hiker may think. Eventually, you’ll pass the Buchanan Pass junction. Continue on towards Monarch Lake, while feeling the tedious grind of dirt and rocks underneath your feet grow more pronounced over time.

After about 6-7 miles, you’ll finally make it to the banks of Monarch Lake. From here, follow the signs toward the Monarch Lake trailhead, which is about 1 mile from the first sighting of the lake. Following along the cool water, a sense of finality is achieved, as the monotonous hike down the valley has ended. Once you see the trailhead, wait for a buddy to pick you up, or hike all the way back.

In the end, this hike is long and tedious at times, but for the most part is one of the best and most spectacular hikes found in the Boulder area. Make sure to bring water and a lunch, as no one will be able to rescue you if you get stuck. Bring a raincoat, a hat, gloves, etc. Make sure that everyone knows where you’re going, and don’t hike alone. Most of all, stay safe, and have a wonderful hike through the Indian Peaks Wilderness. Cheers. 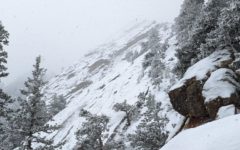 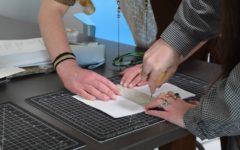 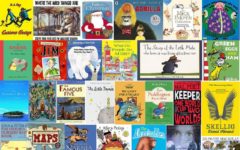 The Innocence of Children’s Books is a Lie 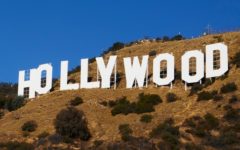 How Hollywood is Slowly Destroying Itself 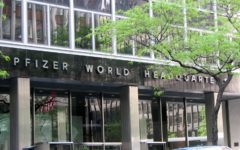 Blood Money: How to Turn a Profit from a Pandemic